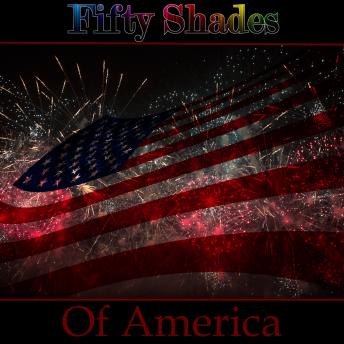 Download or Stream instantly more than 55,000 audiobooks.
Listen to "Fifty Shades of America" on your iOS and Android device.

The Land of the Free, the Home of the Brave. This illustrious phrase encapsulates the aspirations of America and its people. In this volume we feature 50 American poets beginning with the Colonist Anne Bradstreet in the 17th century, when American poetry was entirely rooted in its parental British forms. From here our classic poets take us through Centuries of history, through Independence and expansion Westward, across the cities and vast landscapes of their words. Along the journey we also meet the Imagists, the poets from the Harlem Renaissance by way of the Transcendentalists and the Fireside Poets. The giants of the poetic way loom large; Walt Whitman. Emily Dickinson, Edgar Allan Poe, Paul Laurence Dunbar and Edna St Vincent Millay. Our rambling poetic stroll gives voice to the nation's hopes, its dreams, its failings, its musings. We cannot hope to define America but we do provide the many changing moods and flavours of the times as we discover the essence of its soul.1 - Fifty Shades of America - An Introduction2 - A Nation's Strength by Ralph Waldo Emerson3 - America by Herman Melville4 - The New Colossus by Emma Lazarus5 - America the Beautiful by Katharine Lee Bates6 - Brothers. American Drama by James Weldon Johnson7 - We Wear the Mask by Paul Laurence Dunbar8 - The Negro Speaks of Rivers by Langston Hughes9 - Abraham Lincoln by James Russell Lowell10 - Paul Revere's Ride (The Landlord's Tale) by Henry Wadsworth Longfellow11 - England and America by Florence T Holt12 - Americanisation by G K Chesterton13 - In Amsterdam by Eugene Field14 - Broadway, New York, July 1916 by George Sterling15 - New York at Night by Amy Lowell16 - Harlem by Langston Hughes17 - The Natives of America by Ann Plato18 - An Indian Summer Day On the Prairie by Vachel Lindsay19 - Pray To What Earth Does This Sweet Cold Belong by Henry David Thoreau20 - Hymn To The North Star by William Cullen Bryant21 - An Hymn To the Evening by Phillis Wheatley22 - Trees by Joyce Kilmer23 - from Song of Myself by Walt Whitman24 - Sonnet 12 by Alan Seeger25 - The Ancient Arteries of America by Daniel Sheehan26 - A Crowded Trolley Car by Elinor Wylie27 - The Road Not Taken by Robert Frost28 - Yes, I Have a Thousand Tongues by Stephen Crane29 - Thirteen Ways of Looking At a Blackbird by Wallace Stevens30 - The Raven by Edgar Allan Poe31 - Wild Nights, Wild Nights by Emily Dickinson32 - Comment by Dorothy Parker33 - To My Dear and Loving Husband by Anne Bradstreet34 - The Boy She Used To Know by Damon Runyon35 - Portrait D'une Femme by Ezra Pound36 - Sonnet 18 - I, Being Born a Woman by Edna St Vincent Millay37 - Evening Song by Willa Cather38 - I Hear America Singing by Walt Whitman39 - The Crowd at the Ball Game by William Carlos Williams40 - It Couldn't Be Done by Edgar Albert Guest41 - Hope is the Thing With Feathers by Emily Dickinson42 - Colored Hats from Tender Buttons by Gertrude Stein43 - Solitude by Ella Wheeler Wilcox44 - Sympathy by Paul Laurence Dunbar45 - Chaplinesque by Hart Crane46 - The Ballad of the Harp-Weaver by Edna St Vincent Millay47 - Whispers of Immortality by T S Eliot48 - A Grave by Edith Wharton49 - Bury Me In a Free Land by Frances E W Harper50 - To the Memory of the Americans Who Fell at Eutaw by Philip Freneau51 - Star Spangled Banner by Francis Scott Kay