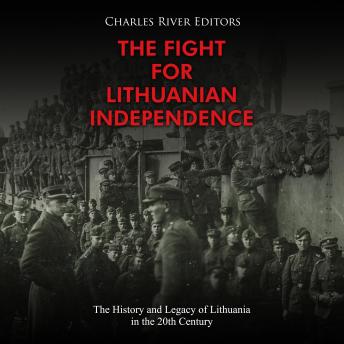 Fight for Lithuanian Independence, The: The History and Legacy of Lithuania in the 20th Century

Download or Stream instantly more than 55,000 audiobooks.
Listen to "Fight for Lithuanian Independence, The: The History and Legacy of Lithuania in the 20th Century" on your iOS and Android device.

Modern day Lithuania is a small country bordering the Baltic Sea with a population of less than 3 million people, but despite its relative size, the nation has exerted an influential role on the history of the region. More recently, in the 20th century, Lithuania was caught between much larger powers in two world wars and then the Cold War. Along with neighbors Latvia and Estonia, Lithuania was one of the only states to truly break free of the Soviet Union when the latter dissolved in 1991. Now entrenched in the EU’s political and security bloc, Lithuania has seen unprecedented economic growth and prosperity, although Vilnius is still wary of the Russian giant on its doorstep.

Given everything going on around it, it should come as little surprise that Lithuania’s history during the 20th century revolved around the remarkable resilience of its people in the face of aggression and imperialism from first Russia, then Nazi Germany, then the Soviet Union. The Fight for Lithuanian Independence: The History and Legacy of Lithuania in the 20th Century examines the geopolitics of the region, Lithuania’s place in it, and the most important events in Lithuania’s recent history.