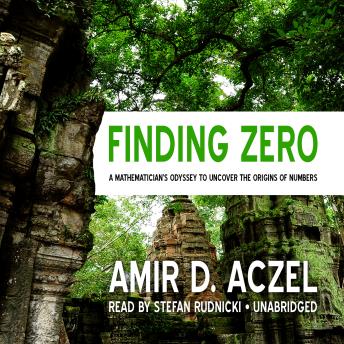 Finding Zero: A Mathemetician’s Odyssey to Uncover the Origins of Numbers

Download or Stream instantly more than 55,000 audiobooks.
Listen to "Finding Zero: A Mathemetician’s Odyssey to Uncover the Origins of Numbers" on your iOS and Android device.

The story of how we got our numbers-told through one mathematician'sjourney to find zero
The invention of numerals is perhaps the greatestabstraction the human mind has ever created. Virtually everything in our livesis digital, numerical, or quantified. The story of how and where we got thesenumerals, which we so depend on, has for thousands of years been shrouded inmystery. Finding Zero is an adventure-filled saga of Amir Aczel's lifelong obsession: to find the original sources ofour numerals. Aczel has doggedly crisscrossed the ancient world, scouringdusty, moldy texts, cross examining so-called scholars who offered wildlydiffering sets of facts, and ultimately penetrating deep into a Cambodian jungleto find a definitive proof. Here, he takes the reader along for the ride.
The history begins with the early Babylonian cuneiformnumbers, followed by the later Greek and Roman letter numerals. Then Aczel asksthe key question: where do the numbers we use today, the so-called Hindu-Arabicnumerals, come from? It is this search that leads him to explore unchartedterritory, to go on a grand quest into India, Thailand, Laos, Vietnam, andultimately into the wilds of Cambodia. There he is blown away to find theearliest zero-the keystone of our entire system of numbers-on a crumbling,vine-covered wall of a seventh-century temple adorned with eaten-away eroticsculptures. While on this odyssey, Aczel meets a host of fascinatingcharacters: academics in search of truth, jungle trekkers looking foradventure, surprisingly honest politicians, shameless smugglers, andtreacherous archaeological thieves-who finally reveal where our numbers comefrom.