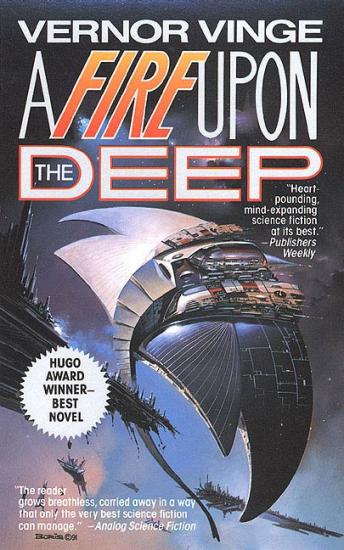 A Fire Upon the Deep

Download or Stream instantly more than 55,000 audiobooks.
Listen to "A Fire Upon the Deep" on your iOS and Android device.

A Fire Upon the Deep is the big, breakout book that fulfills the promise of Vinge's career to date: a gripping tale of galactic war told on a cosmic scale.

Thousands of years hence, many races inhabit a universe where a mind's potential is determined by its location in space, from superintelligent entities in the Transcend, to the limited minds of the Unthinking Depths, where only simple creatures and technology can function. Nobody knows what strange force partitioned space into these 'regions of thought,' but when the warring Straumli realm use an ancient Transcendent artifact as a weapon, they unwittingly unleash an awesome power that destroys thousands of worlds and enslaves all natural and artificial intelligence.

Fleeing the threat, a family of scientists, including two children, are taken captive by the Tines, an alien race with a harsh medieval culture, and used as pawns in a ruthless power struggle. A rescue mission, not entirely composed of humans, must rescue the children-and a secret that may save the rest of interstellar civilization.

A Fire Upon The Deep, which began the Zones of Thought series, is the winner of the 1993 Hugo Award for Best Novel.