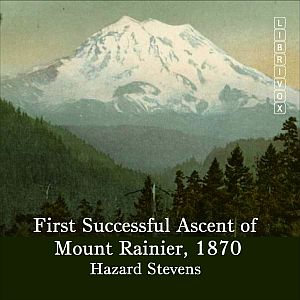 Download or Stream instantly more than 55,000 audiobooks.
Listen to "First Successful Ascent of Mt. Rainier, 1870" on your iOS and Android device.

Hazard Stevens and P.B. Van Trump, aided by the Indian guide Sluiskin, made the first documented successful ascent of Mt. Rainier on August 17, 1870.

Hazard's account of the climb was first published in the Atlantic Monthly in 1876 and later reprinted with an introduction by Edmond S. Meany in 1916. Sluiskin tried to dissuade the climbers. "Takhoma” (the Indian name for Mt. Rainier) "was an enchanted mountain, inhabited by an evil spirit, who dwelt in a fiery lake on its summit. No human being could ascend it or even attempt its ascent and survive." This prophecy almost proved true.

Thinking they could reach the summit and return on the same day, Stevens and Van Trump left behind coats and blankets, only to find themselves trapped overnight in bitter cold. They survived huddled around a volcanic steam vent in an ice cave. "The heat at the orifice was too great to bear for more than an instant, but the steam wet us, the smell of sulfur was nauseating, and the cold was so severe that our clothes, saturated with the steam, froze stiff when turned away from the heated jet." (Summary by Sue Anderson)