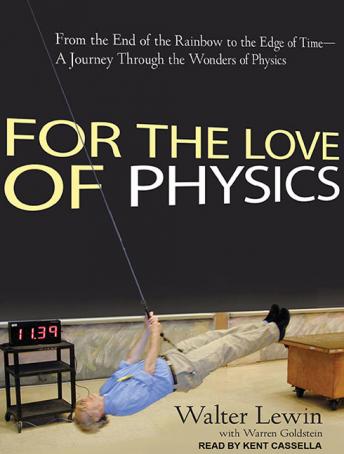 For the Love of Physics: From the End of the Rainbow to the Edge of Time---A Journey Through the Wonders of Physics

Download or Stream instantly more than 55,000 audiobooks.
Listen to "For the Love of Physics: From the End of the Rainbow to the Edge of Time---A Journey Through the Wonders of Physics" on your iOS and Android device.

'You have changed my life' is a common refrain in the emails Walter Lewin receives daily from fans who have been enthralled by his world-famous video lectures about the wonders of physics. 'I walk with a new spring in my step and I look at life through physics-colored eyes,' wrote one such fan. When Lewin's lectures were made available online, he became an instant YouTube celebrity, and the New York Times declared, 'Walter Lewin delivers his lectures with the panache of Julia Child bringing French cooking to amateurs and the zany theatricality of YouTube's greatest hits.'

For more than thirty years as a beloved professor at the Massachusetts Institute of Technology, Lewin honed his singular craft of making physics not only accessible but truly fun, whether putting his head in the path of a wrecking ball, supercharging himself with three hundred thousand volts of electricity, or demonstrating why the sky is blue and why clouds are white. Now, as Carl Sagan did for astronomy and Brian Green did for cosmology, Lewin takes listeners on a marvelous journey in For the Love of Physics, opening our eyes as never before to the amazing beauty and power with which physics can reveal the hidden workings of the world all around us. 'I introduce people to their own world,' writes Lewin, 'the world they live in and are familiar with but don't approach like a physicist-yet.'

Could it be true that we are shorter standing up than lying down? Why can we snorkel no deeper than about one foot below the surface? Why are the colors of a rainbow always in the same order, and would it be possible to put our hand out and touch one? Whether introducing why the air smells so fresh after a lightning storm, why we briefly lose (and gain) weight when we ride in an elevator, or what the big bang would have sounded like had anyone existed to hear it, Lewin never ceases to surprise and delight with the extraordinary ability of physics to answer even the most elusive questions.

Recounting his own exciting discoveries as a pioneer in the field of X-ray astronomy-arriving at MIT right at the start of an astonishing revolution in astronomy-he also brings to life the power of physics to reach into the vastness of space and unveil exotic uncharted territories, from the marvels of a supernova explosion in the Large Magellanic Cloud to the unseeable depths of black holes.

'For me,' Lewin writes, 'physics is a way of seeing-the spectacular and the mundane, the immense and the minute-as a beautiful, thrillingly interwoven whole.' His wonderfully inventive and vivid ways of introducing us to the revelations of physics impart to us a new appreciation of the remarkable beauty and intricate harmonies of the forces that govern our lives.