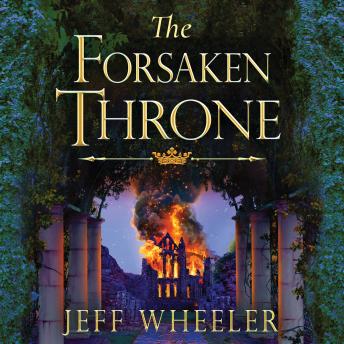 Download or Stream instantly more than 55,000 audiobooks.
Listen to "The Forsaken Throne" on your iOS and Android device.

The thrilling conclusion to the million-copy, Wall Street Journal bestselling Kingfountain series from Jeff Wheeler.
A devastating disaster has left the Forbidden Court in ashes, its fountains destroyed, and its magic at risk. It was destined as the site of Trynne Kiskaddon’s coronation as empress. Now, all Trynne can imagine is the roar of flames, the cries of Gahalatine’s people, and the smell of cinders in a city gone dark. Tragic as the threat to Kingfountain is, it’s nowhere near as foul as the treachery posed by Morwenna. Saboteur, conspirator, and full-blood sister of the king, she is prepared to set forth a wave of destruction that will eliminate everything that stands between her and possession of the throne.
But Trynne has her weapons, too—her magic, her resilience, her skills at intrigue, and especially, Fallon. The man who once swore his allegiance to Morwenna now stands by Trynne’s side as they venture into the unknown to protect those they love, reunite with a family scattered by diabolical forces, and safeguard a kingdom…as well as the destiny the Fountain has for each of them.