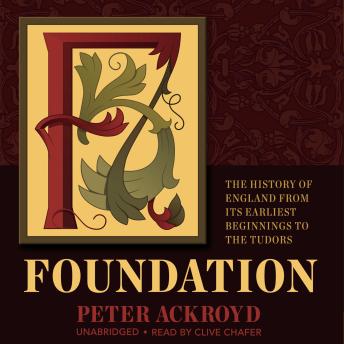 Foundation: The History of England from Its Earliest Beginnings to the Tudors

Download or Stream instantly more than 55,000 audiobooks.
Listen to "Foundation: The History of England from Its Earliest Beginnings to the Tudors" on your iOS and Android device.

In this massive bestseller in England, one of Britain's mostpopular and esteemed historians tells the epic story of the birth of thecountry.
Peter Ackroyd, whose work has always been underpinned by aprofound interest in and understanding of England's history, now tells the epicstory of England itself.
In Foundation,the chronicler of London and of its river, the Thames, takes us fromthe primeval forests of England's prehistory to the death of thefirst Tudor king, Henry VII, in 1509. He guides us from the building of Stonehenge tothe founding of the two great glories of medieval England: common law and thecathedrals. He shows us glimpses of the country's most distant past-a Neolithic stirrup found in a grave, a Roman fort, a Saxon tomb, a medievalmanor house-and describes in rich prose the successive waves of invaders whomade England English, despite being themselves Roman, Viking, Saxon, or NormanFrench.
With his extraordinary skill for evokingtime and place and his acute eye for the telling detail, Ackroyd recounts thestory of warring kings, civil strife, and foreign wars. But he also gives usa vivid sense of how England's early people lived: the homes they built, theclothes they wore, the food they ate, even the jokes they told. All are broughtvividly to life through the narrative mastery of one of Britain's finestwriters.