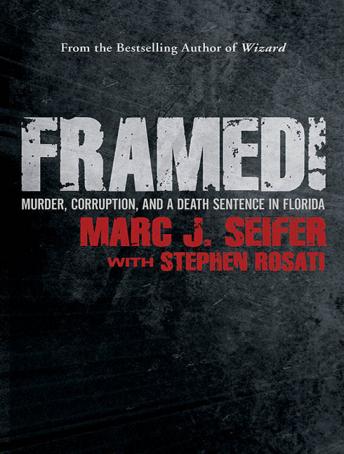 Framed!: Murder, Corruption, and a Death Sentence in Florida

Download or Stream instantly more than 55,000 audiobooks.
Listen to "Framed!: Murder, Corruption, and a Death Sentence in Florida" on your iOS and Android device.

In this real-life courtroom drama, handwriting analysis expert Dr. Marc Seifer shares the true account of a man falsely accused, the coercion and police corruption that threatened to send him to the electric chair, and the series of events that would eventually exonerate him.

Stephen Rosati had it all. An accomplished bodybuilder, former Mr. Rhode Island and owner of a posh health club, Stephen was the son of real estate mogul Carl Rosati. One September day, Stephen's world was shattered when a state trooper arrested him for the murder of drug dealer Joe Viscido, Jr.-a crime that had occurred in Florida four years earlier when Stephen was 1,500 miles away.

Though Stephen could prove he was in New England at the time of the murder, a man named Peter Dallas had confessed to the crime and named Stephen as his accomplice. Stephen found himself in a Rhode Island jail awaiting transfer to Florida, where he could face a death sentence for a crime he knew nothing about.

Stephen set out to prove his innocence. He hired Jack Cicilline, 'one of the keenest legal minds in New England' and attorney to many notorious mobsters, and the Rosatis brought on famed handwriting expert Marc Seifer. Although Dr. Seifer's testimony in court proved that Rosati was in Rhode Island when Viscido was killed, it wasn't enough to deter Florida police from trying to pin the murder on Rosati.

Thus began the longest extradition hearing in U.S. history and a powerful criminology case study in police misconduct, mishandled evidence, and wrongful prosecution. With access to over 1,500 pages of police logs, 1,400 pages of court transcripts, and countless depositions and interviews, Seifer weaves a thrilling story of one man's battle for justice.