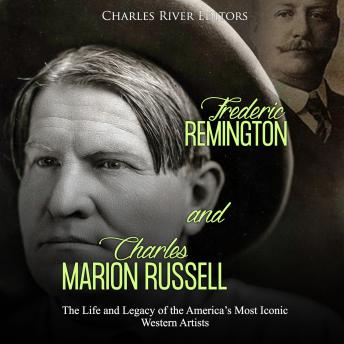 Frederic Remington and Charles Marion Russell: The Life and Legacy of the America’s Most Iconic Western Artists

Download or Stream instantly more than 55,000 audiobooks.
Listen to "Frederic Remington and Charles Marion Russell: The Life and Legacy of the America’s Most Iconic Western Artists" on your iOS and Android device.

Many of the first artists in the West were assigned to exploration and geological parties, working as archivists and obedient to demands of cold accuracy. However, a few were driven by an imaginative mix of real events and fantastical visions to whet the appetite of Eastern consumers and preserve their own nostalgia on canvas. Among the most prominent artists depicting the “old” West was Charles Marion Russell, a prolific painter, sculptor, writer, and storyteller based in the heart of the Montana country. Through his years of capturing scenes of daily life between cowboys and Indians before a backdrop of exquisite Montana scenery, he was known by the names of C.M. Russell, Charlie Russell, and “Kid” Russell. As an artist greatly esteemed among art devotees and virtually all Westerners who knew him, he acquired monikers such as the “Rembrandt of the Range” and the “Cowboy Artist.” Entirely self-trained, Russell left over 4,000 works that include paintings and bronze sculptures of cowboys, Indians, and the landscapes of the West, as well as Alberta, Canada. As an advocate and activist for the Native Americans, he supported the improvement of reservation conditions and spoke out for the Chippewa’s bid for the right to live in Montana. This right was validated by Congress in the early 20th century with the creation of the Rocky Boy Reservation.

New Yorker Frederic Remington held the advantage in education and talents as a draftsman, but he did not lose himself so entirely to the Western experience. His paintings, sculptures, short stories, and novels are often centered on the military and its wars against the resident tribes. Remington, somewhat more cynical than Russell, was nevertheless a master of depicting violent action in fantastical but credible situations where life hung in the balance. He, too, lamented that the land of his youth’s fascination “had nearly vanished.”