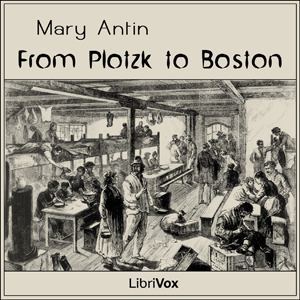 Download or Stream instantly more than 55,000 audiobooks.
Listen to "From Plotzk to Boston" on your iOS and Android device.

An intensely personal account of the immigration experience as related by a young Jewish girl from Plotzk (a town in the government of Vitebsk, Russia). Mary Antin, with her mother, sisters, and brother, set out from Plotzk in 1894 to join their father, who had journeyed to the "Promised Land" of America three years before. Fourth class railroad cars packed to suffocation, corrupt crossing guards, luggage and persons crudely "disinfected" by German officials who feared the cholera, locked "quarantine" portside, and, finally, the steamer voyage and a famiily reunited. For anyone who has ever wondered what it was like for their grandparents or great grandparents to emmigrate from Europe to the United States last century, this is a fascinating narrative. Mary Antin went on to become an immigration rights activist. She also wrote an autobiography, The Promised Land, published in 1912, which detailed her assimilation into American culture. (Summary by Sue Anderson)