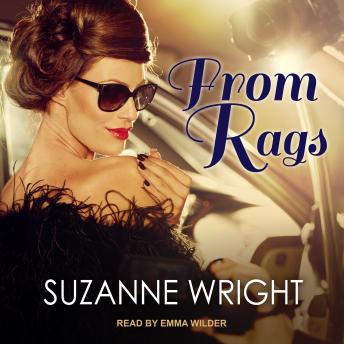 Download or Stream instantly more than 55,000 audiobooks.
Listen to "From Rags" on your iOS and Android device.

Jaxxon Carter, barmaid, would like nothing more than to better her current situation. A one-bedroomed flat, a sleazy landlord, drug-addicted neighbors-not exactly a childhood dream. When a chance encounter leads to a modelling job, she is catapulted to the peak of success. She also finds herself the focus of lethally sensual Connor McKenzie, who she hasn't seen since he left their foster home and went on to become a Formula One driver. But she has no intention of giving in to the mindless need between them. He hurt her once, and she won't allow it to happen a second time.

Confident, determined, compelling . . . Connor McKenzie isn't a man who deprives himself of what he wants. There was only one thing he ever resisted, and it was the one thing he wanted most: the unknowingly enticing Jaxxon. When he sees her on the cover of a magazine, it reawakens every urge he buried. She tries to keep him out of her life, but Connor can't let it go. He resisted her ten years ago for a good reason. But now that reason is no longer there, and he's resolute that nothing-not even Jaxxon-will stop him from having her.