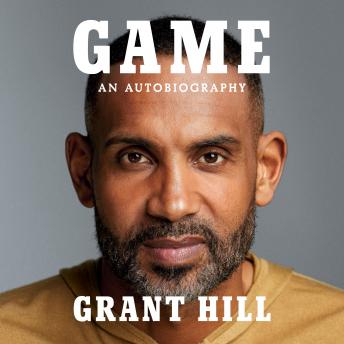 Download or Stream instantly more than 55,000 audiobooks.
Listen to "Game: An Autobiography" on your iOS and Android device.

The full, frank story of a remarkable life’s journey—to the pinnacle of success as a basketball player, icon, and entrepreneur, to the depths of personal trauma and back, to a place of flourishing and peace—made possible above all by a family’s love

Grant Hill always had game. His choice of college was a subject of national interest, and his arrival at Duke University cemented the program’s arrival at the top. In his freshman year, he led the team to its first NCAA championship, and three championship appearances in four years. His Duke career produced some of the most iconic moments in college basketball history, and Coach K proved to be a lifelong mentor. Later, as one of the NBA’s best players and a new face of the Detroit Pistons franchise, Hill was the first person with the potential to give Michael Jordan a run for his money, not just as a player but as a brand. His $45 million rookie contract was almost the least of it. He turned down Nike for Fila, and soon Method Man and Tupac Shakur were wearing his shoes.

Hill writes candidly about all of it, including the transactional impermanence of life in the league and the isolation caused by his growing fame. His parents and friends helped ground him, and eventually he met a gifted musician named Tamia. The love he found with her and the arrival of their two beautiful daughters would be his rock as a brutal and mysterious injury sidelined him, coinciding with his wife’s own serious health struggles.

With openness and insight, Hill relates his entire path, including post-career highlights like his Hall of Fame induction, co-ownership of the Atlanta Hawks, the directorship of the USA Basketball Men’s National Team, and even a yearly gig calling the Final Four. Hill’s father, Calvin, used to tell him that there were always a lot of reasons but never any excuses, and Game is a distillation of a lifetime’s effort to understand the reasons—the good and the bad. At his hardest moments, Hill sought out wisdom from others, stories of inspiration and overcoming obstacles. Now, with Game, he has returned the favor.