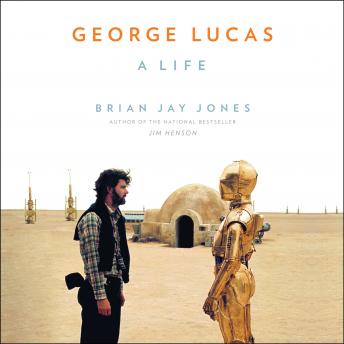 Download or Stream instantly more than 55,000 audiobooks.
Listen to "George Lucas: A Life" on your iOS and Android device.

The essential biography of the influential and beloved filmmaker George Lucas.

On May 25, 1977, a problem-plagued, budget-straining independent science-fiction film opened in a mere thirty-two American movie theaters. Conceived, written, and directed by a little-known filmmaker named George Lucas, the movie originally called The Star Wars quickly drew blocks-long lines, bursting box-office records and ushering in a new way for movies to be made, marketed, and merchandised. It is now one of the most adored-and successful-movie franchises of all time.

Now, the author of the bestselling biography Jim Henson delivers a long-awaited, revelatory look into the life and times of the man who created Luke Skywalker, Han Solo, and Indiana Jones.

If Star Wars wasn't game-changing enough, Lucas went on to create another blockbuster series with Indiana Jones, and he completely transformed the world of special effects and the way movies sound. His innovation and ambition forged Pixar and Lucasfilm, Industrial Light & Magic, and THX sound.

Lucas's colleagues and competitors offer tantalizing glimpses into his life. His entire career has been stimulated by innovators including Steven Spielberg and Francis Ford Coppola, actors such as Harrison Ford, and the very technologies that enabled the creation of his films-and allowed him to keep tinkering with them long after their original releases. Like his unforgettable characters and stories, his influence is unmatched.