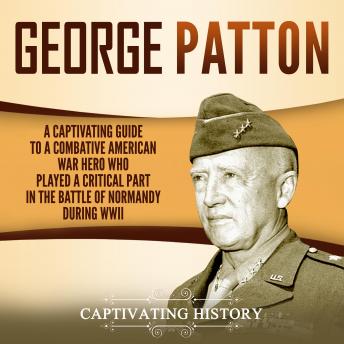 George Patton: A Captivating Guide to a Combative American War Hero Who Played a Critical Part in the Battle of Normandy During WWII

Download or Stream instantly more than 55,000 audiobooks.
Listen to "George Patton: A Captivating Guide to a Combative American War Hero Who Played a Critical Part in the Battle of Normandy During WWII" on your iOS and Android device.

Explore the captivating life of George Patton.
General George S. Patton remains a household name to this day even though he died decades ago. Not only was he a brilliant military commander, he was also a forceful personality and a flamboyant human being whose strong character led him through many difficulties.
This biography aims to tell Patton's story in a captivating manner that will bring him to life for the education and enjoyment of young and old. It will explore his many adventures, but above all, it will investigate who Patton was as a person.
This captivating history audiobook covers topics such as:
The boy who couldn't read Always a warrior Ane soft spot Fencing, sword design, and the 1912 olympicsAn ivory-handled revolverAmerican tanksDo not surrenderA Purple Heart for GeorgeA taste of action Lions tremble at his approach Dead mules in MessinaNormandy and oOeration FortitudePlay ballAnd much more!So listen to this audiobook now if you want to learn more about the remarkable life of George Patton!