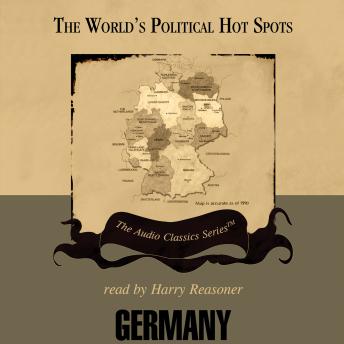 Download or Stream instantly more than 55,000 audiobooks.
Listen to "Germany" on your iOS and Android device.

Germany is historically one of the most important of all nations. Since emerging from its days as a Roman province, Germany (including Prussia) has had a central role in European affairs. It has reached the heights in art, music, literature, and political power, yet it’s also reached the depths in humiliating military defeat and partition. This presentation reviews the broad sweep of German history.
The World’s Political Hot Spots series explains the basis of conflicts in some of the world’s most politically sensitive areas. Many of these regions are in today’s headlines, and tensions recently have become violent in virtually all of them. Each presentation covers up to ten centuries of background, revealing how and why today’s problems occur.