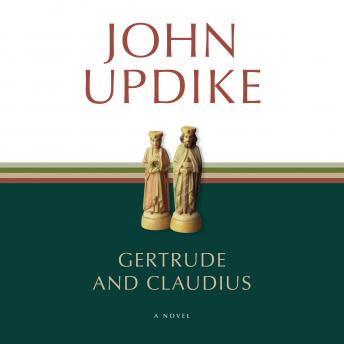 Gertrude and Claudius: A Novel

Download or Stream instantly more than 55,000 audiobooks.
Listen to "Gertrude and Claudius: A Novel" on your iOS and Android device.

Gertrude and Claudius are the “villains” of Hamlet: he the killer of Hamlet’s father and usurper of the Danish throne; she his lusty consort, who marries Claudius before her late husband’s body is cold. But in this imaginative “prequel” to the play, John Updike makes a case for the royal couple that Shakespeare only hinted at. Gertrude and Claudius are seen afresh against a background of fond intentions and family dysfunction, on a stage darkened by the ominous shadow of a sullen, erratic, disaffected prince. “I hoped to keep the texture light,” Updike said of this novel, “to move from the mists of Scandinavian legend into the daylight atmosphere of the Globe. I sought to narrate the romance that preceded the tragedy.”