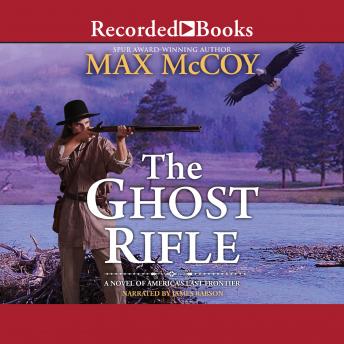 Download or Stream instantly more than 55,000 audiobooks.
Listen to "Ghost Rifle" on your iOS and Android device.

Three-time Spur Award winner Max McCoy combines fast-paced action, frontier history, and powerful family drama in this epic saga of life, love, and death in the American west. SEARCHING FOR A GHOST, A LEGEND, AND A DREAM ... Descended from a long line of ramblers and rogues, Jack Picaro came to America to seek his fortune. But after killing his best friend in a drunken duel, the apprentice gunsmith flees westward, leaving behind children he does not know, Gus and April. As Jack ventures up the Missouri River, he finds an unspoiled land where a man can live free-and also be attacked by an Arikara war party. His rifle stolen in the bloody skirmish, Jack sets out alone to reclaim it. His wild escapade ends in a fight to the death with a legendary Crow warrior named Standing Wolf. So begins a fateful epic search across the last frontiers of the untamed West. From the muddy banks of the Mississippi to the shining peaks of the Rockies, Jack Picaro will leave a trail of clues for an abandoned son, Gus, to find him: a famous gunsmith who will make history with a weapon of his own design-and forged a legend that would be passed down for generations. This is the story of ... THE GHOST RIFLE