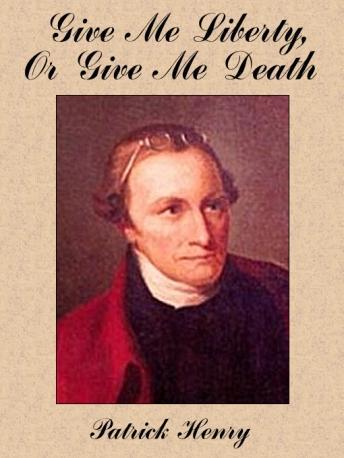 Give Me Liberty, or Give Me Death

Download or Stream instantly more than 55,000 audiobooks.
Listen to "Give Me Liberty, or Give Me Death" on your iOS and Android device.

The most famous speech of a brilliant American orator. Although historically targeted at the British, his impassioned words resonate against todays headlines. A classic worth owning!

This speech was delivered at the Second Virginia Convention, which was being held at Richmond, Virginia. Other convention members had just given speeches urging caution and patience until the British crown replied to the Continental Congress' latest petition for reconciliation. Patrick Henry wanted to raise a militia, and put Virginia in a posture of defense (the ""Battle of Lexington and Concord"" was still a month away). This speech was his rebuttal. The ""President"" he was addressing was the Convention's president, Peyton Randolph, of Williamsburg, Virginia.

Give Me Liberty, or Give Me Death