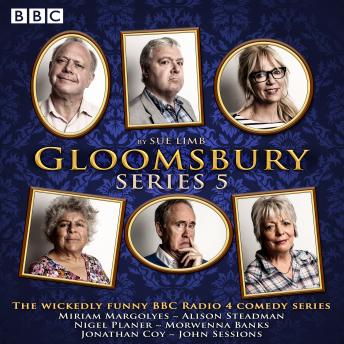 Download or Stream instantly more than 55,000 audiobooks.
Listen to "Gloomsbury: Series 5: The hit BBC Radio 4 comedy" on your iOS and Android device.

The complete fifth series of Sue Limb's satirical send-up of the Bloomsbury Group.

In this fifth series, our arty, adulterous Bohemians are creating havoc at home and abroad. Henry is hoping to ignore his fiftieth birthday - but Vera has organised a surprise party. When Venus sneaks in uninvited and makes a nuisance of herself in the bushes, Henry wants to head for the hills. Fortunately, a lecture tour of America beckons...

In the USA, Vera meets Dorothy Barker at the Algonquin, while Henry rubs shoulders with Al Padrone en route to Chicago. Meanwhile, a cottage on the Sizzlinghurst estate has become vacant, and everybody wants it.

Returning from the States, Henry seeks election as a Labour Party candidate, while Ginny talks socialism with George Gurnard Shaw. Vera decides she wants another child, but Henry whisks her off to Paris for a fling before the war starts. Accompanied by Ginny and Lionel, they are enjoying a last-minute whirlwind of pleasure in the City of Love when Venus arrives with some dreadful news...

'... one of the funniest, slyest, most naughtily inventive and brilliantly performed shows on the air' Gillian Reynolds, The Daily Telegraph

'A gloriously silly show' The Lady