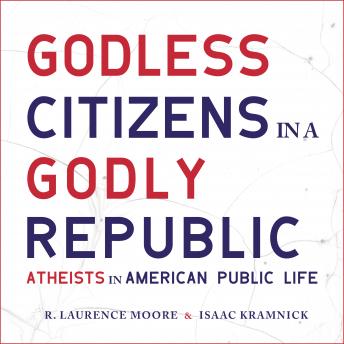 Download or Stream instantly more than 55,000 audiobooks.
Listen to "Godless Citizens in a Godly Republic: Atheists in American Public Life" on your iOS and Android device.

From colonial times into the twentieth century, our laws and court cases ignored atheism, assuming that all good Americans were religious. Americans came to associate atheism with radical social philosophies that advocated violence-especially anarchism and communism. Avowed nonbelievers were derided, even the famous patriot Thomas Paine. Only in the twentieth century, with the passage of laws allowing for conscientious objection to war, did nonbelief enter debates about religious liberty. Still, today every one of the fifty states has God written into its constitution, with eight requiring a belief in God for holding public office. God is everywhere in American public life: on our currency, in the Pledge of Allegiance, and in the national motto. R. Laurence Moore and Isaac Kramnick explore both God's omnipresence and the dramatic rise in nonbelievers that has led to an 'atheist awakening' intent on holding the country to its secular principles.