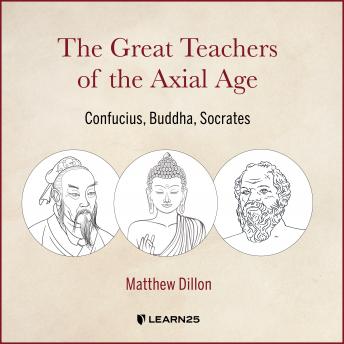 The Great Teachers of the Axial Age: Confucius, Buddha, Socrates

Download or Stream instantly more than 55,000 audiobooks.
Listen to "The Great Teachers of the Axial Age: Confucius, Buddha, Socrates" on your iOS and Android device.

Tour the most formative period for religion and philosophy in world history.  Join award-winning classics professor Matthew Dillon and explore the myriad developments of the Axial Age.

Axial Age refers to the era (800–200 BCE) when five Eurasian civilizations experienced an unprecedented period of development in philosophy, religion, and art. In this compelling audio course, Professor Matthew Dillon argues that the schools of thought that emerged in this period are integral to how we think about the big questions of existence today.

In 15 eye-opening lectures, Prof. Dillon makes the compelling case that the Axial Age was an ancient age of Enlightenment that has no parallel in world history. As you travel through the ancient cultures of China, India, Persia, Israel and Greece, you’ll learn how each region’s great thinkers developed an astonishing variety of ways of understanding the world and our place in it.

While you explore the contributions of Confucius, Socrates and the Buddha; examine works of Taoism, Hinduism, Judaism, and Zoroastrianism; survey Homerian epics; and explore concurrent political and economic forces shaping the region, you’ll attempt to answer a central question: Why was so much happening at Eurasia at this time? In these captivating lectures, you’ll find Prof. Dillon’s enthusiasm for this under-explored period in world history infectious.