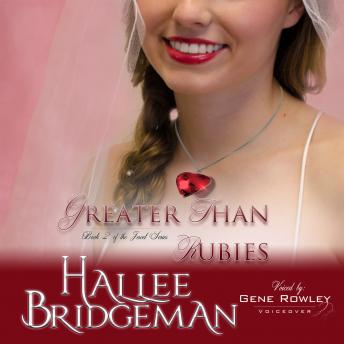 Download or Stream instantly more than 55,000 audiobooks.
Listen to "Greater Than Rubies" on your iOS and Android device.

Robin Bartlett said, "Yes!" Will she say, "I do," when the big day arrives?   From his cultured handsome looks to his vast fortune, Antonio "Tony" Viscolli is every red-blooded American girl's dream match. It doesn't hurt that he completely loves and adores Robin with all his heart and soul from practically the moment they first meet. Robin comes from a blistering past, struggling and fighting for the survival of herself and her two younger half-sisters in a cold, cruel world. By the time Tony thaws her heart, she has known hunger, poverty, violence, and want. Robin never had a chance to dream of a white wedding gown or a prince charming. Instead, her dreams were nightmares dark and clouded with fear and desperation. For months, Tony courted the blond beauty with the sapphire eyes. He teased Robin and pursued her. He showered with attention, respect, and charm. He covered her in diamonds, sapphires, and rubies. Tony satisfied every heart's desire. Finally, Robin came to understand God's love for her as imitated by the unconditional love Tony freely offered. Then, on a sunny Florida beach, Tony proposed and Robin eagerly said "Yes!" Back in bitter cold Boston, doubts about becoming a billionaire's bride begin to crowd out her hopes for happiness. Robin worked for tips until just a few months before Tony proposed on that sunny stretch of sand. In fact, she waited his table less than half a year earlier. Having no experience facing these challenges, Robin struggles to cope feeling the pressures of relocating; of unreliable transportation; of the never-ending details of the shower ceremony reception honeymoon; of worries that her sisters will smoothly transition along with her; of changing her name; all while dealing with her father's very serious legal problems. As the date draws inexorably near and the pressure mounts, Robin begins to grasp the scale of her fiancé's vast material wealth and holdings responsibilities of the virtual empire he commands. She witnesses his generosity when he takes on a young protégé straight from the tough South Boston streets. Ultimately, Robin questions whether she is truly the girl of Tony's dreams. Is she the woman God has made for him? In taking her on as a wife, would she act as helpmeet or poison apple? In truly loving Tony, would it be better to bind herself to him for all eternity or return his freedom? When her nightmares return in full forcey remind Robin of an even deeper and more terrifying prospect. Will she give in to her insecurities and cancel Boston's "Royal Wedding" for good? Or, with God's guidance, will Tony sacrifice everything to prove to his beloved Robin her true worth?