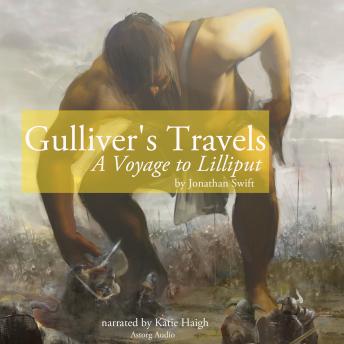 Gulliver's Travels: A Voyage to Lilliput

Download or Stream instantly more than 55,000 audiobooks.
Listen to "Gulliver's Travels: A Voyage to Lilliput" on your iOS and Android device.

Gulliver's Travels by Jonathan Swift is a wild series of adventures widely acclaimed as "universally read" and highly influential. After a shipwreck, an Englishman discovers new, strange lands, and learns of the customs and governments of their inhabitants. This is an opportunity both for absurd humor and political satire, and the story of Lilliput may be the best example of Swift's imagination and wit. Gulliver finds himself a prisoner of a race of tiny people, the Lilliputians; they are no more than 6 inches tall, and he appears a giant to them. Soon afterwards, the spectacular giant becomes a favorite of the court, and is given a good view of the politics of the kingdom. Discover the most famous of Gulliver's travels, train your critical mind and choose your side between Big Endians and Little Endians, for a journey of adventures and laughter, narrated by one of the best storytellers.