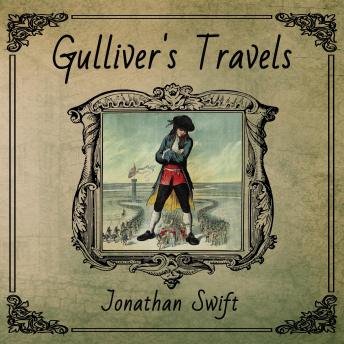 Download or Stream instantly more than 55,000 audiobooks.
Listen to "Gulliver's Travels (Jonathan Swift)" on your iOS and Android device.

Gulliver, an adventurous traveler, sails through the unknown waters of seas and oceans. A storm ruptures his ship and the sailor ends up unconscious on the shore of a mysterious country. Having woken up, the sailor finds himself surrounded by tiny men, who are trying to tie him and chain him to the ground. He easily gets rid of the restraints, only to find himself dragged into the epicenter of the civil war that began because of a mere trifle. Jonathan Swift's satiric-fantasy novel 'Gulliver's Travels' cleverly mocks human and social flaws. Famous works of the author Jonathan Swift's: Meditation Upon a Broomstick, A Tale of a Tub, The Battle of the Books, Gulliver's Travels, Essays: Thoughts on Various Subjects, Moral and Diverting, An Argument Against Abolishing Christianity, The Conduct of the Allies, Drapier's Letters, A Modest Proposal, Directions to Servants.