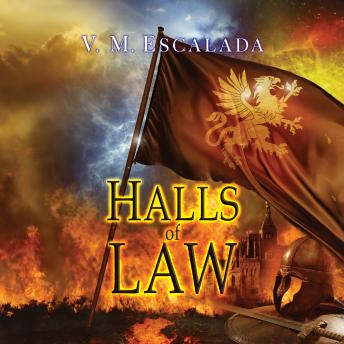 Download or Stream instantly more than 55,000 audiobooks.
Listen to "Halls of Law" on your iOS and Android device.

The Faraman Polity was created by the first Luqs and has been ruled for generations by the bloodline. While the military protects, it is the Halls' Talents-those gifted from birth with magical abilities-who serve as the agents and judges of the Law. For no one can successfully lie to a Talent. They can read people by physical contact. Thanks to the Talents and the military, the Polity has long remained a stable and successful society. But all that is about to change.

Seventeen-year-old Kerida Nast always wanted a career in the military. But when her Talent is discovered, she'll spend the rest of her life as a psychic for the Halls of Law. Just as Kerida begins her new role, the Polity is invaded by strangers from Halia, who begin a systematic campaign of destruction, killing every last Talent they can find.

Kerida escapes, falling in with Tel Cursar, a young soldier fleeing the battle which saw the deaths of the royal family. Having no obvious heir to the throne, the military leaders are divided, unable to save the empire. And with the Halls burned to the ground, and the Talents slaughtered, the Rule of Law will be shattered.

Kerida and Tel are forced to enter old mining tunnels in a desperate attempt to flee. But the tunnels hide a dangerous secret, a long-hidden colony of Feelers-paranormal outcasts shut away from the world. These traditional enemies of the Halls of Law welcome Kerida, believing she fulfills a Prophecy. With the help of these new allies, Kerida and Tel start a frantic mission to learn whether any heir to the throne remains, and find them before the Halians do. For if they fail, it will spell the end of the Faraman Polity and the Rule of Law.