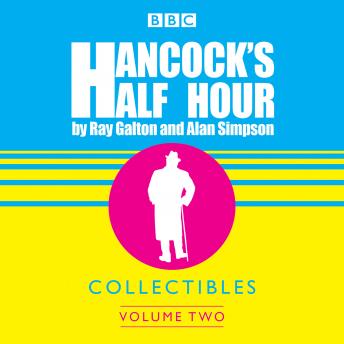 Download or Stream instantly more than 55,000 audiobooks.
Listen to "Hancock's Half Hour Collectibles: Volume 2" on your iOS and Android device.

This second treasury of rare archive material is spearheaded by four newly-restored radio episodes of Hancock’s Half Hour, all from 1956: ‘The New Secretary’, ‘Anna and the King of Siam’, ‘The Stolen Petrol’ and ‘The Expresso Bar’. Starring alongside Tony Hancock are Sid James, Bill Kerr, Hattie Jacques and Kenneth Williams.

A number of fascinating extracts from the long-running 1950s variety show Calling All Forces feature Hancock performing alongside Charlie Chester and others, whilst the famous Budgerigar Sketch - with Hancock as the eponymous bird - is featured here from 1958’s Christmas Night With the Stars on BBC TV.

In What Happened to Hancock? from 1971, Philip Oakes reflects upon the complex personality of his friend, and elicits personal recollections from those who knew him, including Ralph Reader, Beryl Vertue, Sylvia Sims, Sid James, Duncan Wood, Michael Wale, Ray Galton and Alan Simpson. Heroes for a Time, from 1978, considers Hancock’s legacy ten years after his death, with contributions from Lyn Took, Barry Took, Arthur Askey and Billy Marsh. Freddie Ross Hancock recollects life as Tony’s second wife in a Woman’s Hour interview from 1979.

Barry Cryer introduces Six Characters in Search of an Answer: Tony Hancock from 2003 and examines the man behind the character, with the help of Galton & Simpson, Dennis Main Wilson and Richard Briers. Finally, in two editions of The Essay from 2015, Simon Heffer examines and compares the careers of both Tony Hancock and his stalwart co-star Sid James.

Marking the legacy of one of our greatest comedy entertainers, this collection is a must for fans of Tony Hancock and Hancock's Half Hour.

This release features a bonus PDF booklet alongside the audio, which looks at each item in the context of Hancock’s broadcasting career with insights into how many of these lost or rare items were discovered.