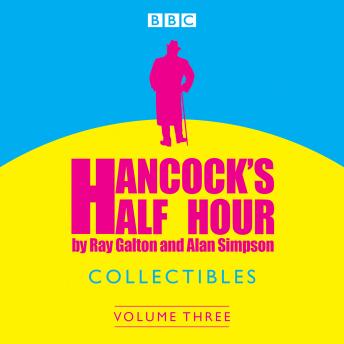 Download or Stream instantly more than 55,000 audiobooks.
Listen to "Hancock's Half Hour Collectibles: Volume 3" on your iOS and Android device.

This third treasury of rare archive material presents another four newly restored radio episodes of Hancock’s Half Hour: ‘The 13th of the Series’ (1957), ‘The Male Suffragettes’ (1958), ‘The Sleepless Night’ (1958) and ‘The Last Bus Home’ (1959). Starring once again alongside Tony Hancock are Sid James, Bill Kerr, Hattie Jacques and Kenneth Williams.

Three further editions of the radio hit Calling All Forces, from 1952, feature Hancock as co-compere with Charlie Chester, with a bill featuring Robb Wilton and many other light entertainment stars of the day.

The lad speaks for 'imself in two rarely heard Tony Hancock interviews, first broadcast on Open House (1964) and Late Night Line-Up (1965). Elsewhere Robert Cushman and Denis Norden survey Hancock’s life and career in Turns of the Century (1995) and Stone Me, What a Life! (2004) respectively.

A bonus PDF booklet looks at each item in the context of Hancock’s broadcasting career, with insights into how many of these lost or rare items were discovered.

Marking the legacy of one of our greatest comedy entertainers, this collection is a must for fans of Tony Hancock and Hancock's Half Hour.