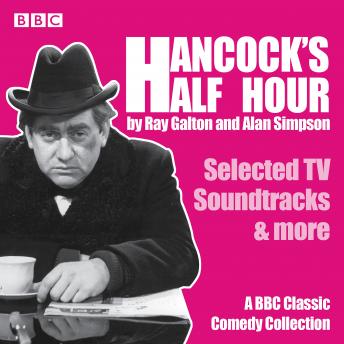 Over 30 brilliant BBC recordings, including TV shows, radio highlights and a wealth of previously unreleased material

Tony Hancock was one of Britain's best-loved and most influential postwar comedians. Collected here are some of the very best radio and TV episodes from Hancock's Half Hour, plus celebrations, compilations, interviews, original dramas and documentaries - many of which have never before been available on audio.

There's the debut show from the radio series, The First Night Party, introduced by writers Ray Galton and Alan Simpson; and the last ever BBC television show, The Succession - Son and Heir. Also included are four new-to-audio TV episodes - The Oak Tree, The Train Journey, The Tycoon and The Lift - as well as many other television favourites: The Flight of the Red Shadow, The Wrong Man, The Economy Drive, Lord Byron Lived Here, The Cold, The Emigrant, The Baby Sitters, The Poison Pen Letters, The Bedsitter, The Bowmans, The Radio Ham and The Blood Donor.

Two programmes introduced by Galton and Simpson, The Best of Hancock's Half Hour (Radio) and The Best of Hancock's Half Hour (TV) showcase the show's finest moments, and more classic clips can be found in Unique Hancock, an extended version of the vintage 1973 vinyl LP complete with commentary and linking narration. And in Steve Punt's Hancock Cuttings, included here for the first time on audio, the comedian and Tony Hancock fan presents a host of oddities and rarities featuring the lad himself.

Finally, we go behind-the scenes with Galton and Simpson in a trio of insightful interviews - a fascinating 30-minute discussion, specially recorded for BBC Audio in 2003, and the radio programmes In Conversation with Galton and Simpson and The Complete and Utter History of Hancock's Half Hour, in which the duo chat to Paul Jackson and Paul Merton respectively.

Please note: due to the age of these recordings, the sound quality may vary.