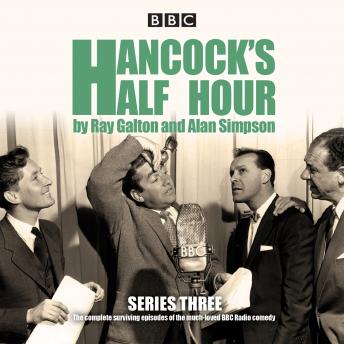 Download or Stream instantly more than 55,000 audiobooks.
Listen to "Hancock’s Half Hour: Series 3: Ten episodes of the classic BBC Radio comedy series" on your iOS and Android device.

Created by Ray Galton and Alan Simpson in 1954, Hancock’s Half Hour was the radio vehicle that made Tony Hancock a household name. Each week listeners would be admitted to the sometimes fantastical, sometimes mundane life of “the lad ‘imself”. Aided and abetted by Sid James, Andrée Melly, Bill Kerr and Kenneth Williams, Hancock would enter into the spirit of each episode with characteristic dolefulness.

This collection of 10 episodes represents the surviving archive from the third radio series, along with PDF booklets featuring episode guides, series notes, cast biographies and specially written introductions by Galton and Simpson. Also included are two radio documentaries about Tony Hancock: Stone Me, What a Life! and The Complete and Utter History of Hancock.

The episodes included are The Pet Dog; The Jewel Robbery; The Bequest; The Blackboard Jungle; The Diet; Hancock’s Heir; The Student Prince; The Greyhound Track; The Conjurer and The Test Match.

Please note: due to the archive nature of the recordings, sound quality may vary.