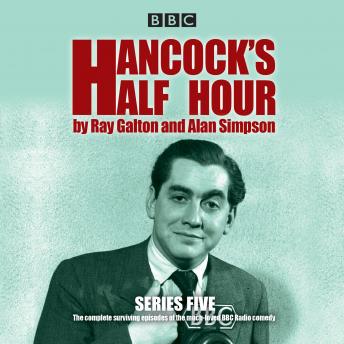 Download or Stream instantly more than 55,000 audiobooks.
Listen to "Hancock's Half Hour: Series 5: 20 episodes of the classic BBC Radio comedy series" on your iOS and Android device.

Created by Ray Galton and Alan Simpson in 1954, Hancock’s Half Hour was the radio vehicle that made Tony Hancock a household name. Each week listeners would be admitted to the sometimes fantastical, sometimes mundane life of 'the lad ‘imself'. Aided and abetted by Sid James, Bill Kerr Kenneth Williams and Hattie Jacques, Hancock would enter into the spirit of each episode with characteristic dolefulness.

This volume contains all 20 episodes from the fifth radio series, collected together for the first time. In these hilarious Half Hours, Hancock has a makeover; turns his home into a private school; stands in the East Cheam by-election; presents three short plays from the East Cheam Repertory Company; takes in a wrestling match with Miss Pugh and gets more than he bargains for when he wins a TV quiz show. The episodes are: The New Radio Series; The Scandal Magazine; The Male Suffragettes; The Insurance Policy; The Publicity Photograph;The Unexploded Bomb; Hancock's School; Around the World in Eighty Days; The Americans Hit Town; The Election Candidate; Hancock's Car; The East Cheam Drama Festival; The Foreign Legion; Sunday Afternoon at Home; The Grappling Game; The Junk Man; Hancock's War; The Prize Money; The Threatening Letters and The Sleepless Night.