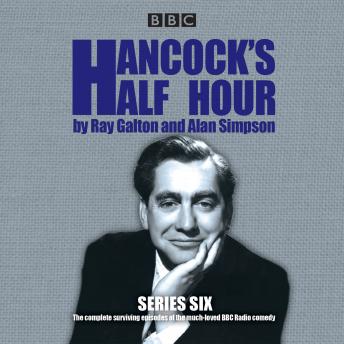 Download or Stream instantly more than 55,000 audiobooks.
Listen to "Hancock's Half Hour: Series 6: 19 episodes of the classic BBC Radio comedy series" on your iOS and Android device.

Created by Ray Galton and Alan Simpson in 1954, Hancock’s Half Hour was the radio vehicle that made Tony Hancock a household name. Each week listeners would be admitted to the sometimes fantastical, sometimes mundane life of 'the lad ‘imself'. Aided and abetted by Sid James, Bill Kerr Kenneth Williams and Hattie Jacques, Hancock would enter into the spirit of each episode with characteristic dolefulness.

This volume contains all 14 shows from the sixth radio series, collected together for the first time, including previously unpublished restored versions of The Waxwork, The Fête and The Poetry Society. Also included is the 1958 Christmas Special episode and four re-recordings made for the BBC Transcription Service. Among these hilarious Half Hours, Hancock enters an eating competition; sets out to save a local landmark; becomes the director of Sid's guided tours company and enjoys an evening of abstract verse with his avant-garde friends.