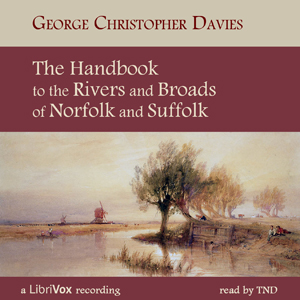 The Handbook to the Rivers and Broads of Norfolk & Suffolk

Download or Stream instantly more than 55,000 audiobooks.
Listen to "The Handbook to the Rivers and Broads of Norfolk & Suffolk" on your iOS and Android device.

The Broads are Britain's largest protected wetland and are home to a wealth of wildlife, especially fish and birdlife. They comprise a network of mostly navigable rivers and lakes in the English counties of Norfolk and Suffolk. The lakes (or broads) were originally formed by the gradual natural flooding of medieval peat excavations and cover an area of some 303 square kilometres (117 sq mi).

The rivers and broads subsequently evolved to become a system of water-highways linking the City of Norwich and other inland towns such as, Beccles, Belaugh and Barton with the sea-ports of Great Yarmouth and Lowestoft. This is also where the unique Norfolk Wherry, with its shallow draught and distinctive gaff rig with a single, high-peaked sail carried goods and passengers around the Broads area.The Broads have also been a boating holiday destination since the late 19th century and this book is a record of a two week waterborne holiday taken by the author and a friend at the turn of the last century.

So, join me if you will, on an auditory cruise around these unique waterways through expansive landscapes under wide open skies. - Summary by Wikipedia and TND