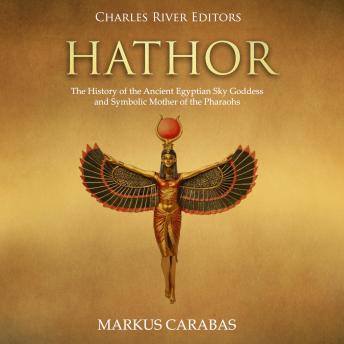 Hathor: The History of the Ancient Egyptian Sky Goddess and Symbolic Mother of the Pharaohs

Download or Stream instantly more than 55,000 audiobooks.
Listen to "Hathor: The History of the Ancient Egyptian Sky Goddess and Symbolic Mother of the Pharaohs" on your iOS and Android device.

Africa may have given rise to the first human beings, and Egypt probably gave rise to the first great civilizations, which continue to fascinate modern societies across the globe nearly 5,000 years later. From the Library and Lighthouse of Alexandria to the Great Pyramid at Giza, the Ancient Egyptians produced several wonders of the world, revolutionized architecture and construction, created some of the world’s first systems of mathematics and medicine, and established language and art that spread across the known world. With world-famous leaders like King Tut and Cleopatra, it’s no wonder that today’s world has so many Egyptologists.


Today, the goddess Hathor is one of the least known deities in the ancient Egyptian pantheon, and the ancient Egyptians would surely be surprised by this fact. Hathor enjoyed a principal position among the gods of ancient Egypt for much of Egyptian history. If anything, she was ubiquitous, with several key cult centers at Dendera, Memphis, and Thebes, and she played various roles for Egyptian society.


Like many Egyptian deities, Hathor took the form of animals at times. She could 'become' a vulture, a cow, or a human, but she was most often depicted as the latter. She is identified in her human form by her long black hair, tied back with a filet beneath a pair of cow horns with the sun disk in between them. The presence of the disk between the horns is a clear indication of her association with the sun deity. That she wore a uraeus - the upright snake seen on the forehead of royal gods and humans - is a sign of her association with royalty, too.


Whenever an ancient Egyptian deity was associated with royalty, they invariably had a connection with one of the first divine kings: Ra, Osiris, or Horus. Hathor, however, had connections with all three. In the case of her cult center at Dendera, she was not just the wet nurse or mother of Horus‒as was the case later, with Isis‒but she was also his consort. In this way, she became the consort of all kings and as such, garnered the characteristics of an 'ideal' partner or queen. This consort of kings was also adept at magic, particularly healing magic, which would become a more predominant characteristic of Hathor in the myths in which she appeared with Horus. Aside from this more mundane role, she was also the 'great cow of the heavens that gave birth to the sun' at Dendera.


It was, perhaps, this great multiplicity that resulted in her losing prominence in the conscious memory of the world. Many deities in world religions often have a small coterie of roles that could be logically spliced together to make a single, divine figure whose character can easily be described, but this is not the case for Hathor. She appears in creation stories as the principle bringing forth the universe and is similarly referred to as the great mother goddess of the sky whose symbolic tree both nourishes and nurtures. Yet she is also the alluring goddess of love whose ecstatic cult practices were born from a grotesque myth involving the floodplains of the Nile being saturated with the blood of humans she massacred. She may be difficult to sum up by a person who has grown up surrounded by the symbols of monotheism, but she is an excellent example of the multi-faceted concepts the ancient Egyptians reconciled in their religion. To understand a little more about Hathor, it will be useful to gain a better understanding of how the ancient Egyptians thought.


Hathor: The History of the Ancient Egyptian Sky Goddess and Symbolic Mother of the Pharaohs examines the history of the deity, her characteristics, and her lasting legacy on Egypt. Along with pictures depicting important people, places, and events, you will learn about Hathor like never before.