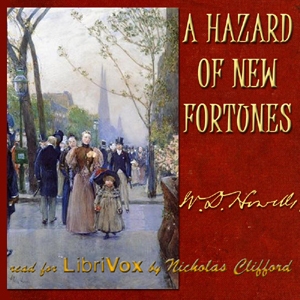 A Hazard of New Fortunes

Download or Stream instantly more than 55,000 audiobooks.
Listen to "A Hazard of New Fortunes" on your iOS and Android device.

Howell's novel is set in New York of the late nineteenth century, a city familiar to readers of Edith Wharton and Henry James. Basil March, a businessman from Boston of a literary bent, moves with his family to New York to edit a new journal founded by an acquaintance. Its financial support, however, comes from a Mr. Dryfoos, a Pennsylvania Dutch farmer suddenly become millionaire by the discovery of natural gas on his property, and now living in New York with his family in a style he hopes will befit his new wealth.

Is it his new fortune that presents a hazard? Or is it the new wealth of New York City in the Gilded Age? Both March and his literary creator are increasingly aware of some of the social and economic contradictions that beset the city of the time (though some of Howell's analysis sounds as if it well might fit New York today). Characters such as, among others, Dryfoos's children, a German socialist immigrant who fought for the Union cause, an impoverished Southern colonel still persuaded that a reformed slavery might work, a young woman drawn from the upper reaches of Old New York society, help to enrich the story and its setting with their differing viewpoints. ( Nicholas Clifford)