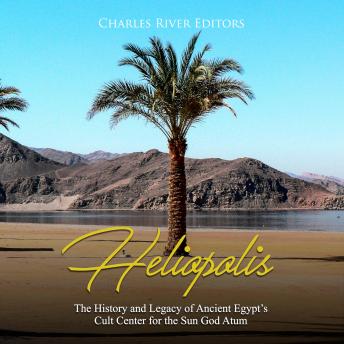 Heliopolis: The History and Legacy of Ancient Egypt's Cult Center for the Sun God Atum

Download or Stream instantly more than 55,000 audiobooks.
Listen to "Heliopolis: The History and Legacy of Ancient Egypt's Cult Center for the Sun God Atum" on your iOS and Android device.

The city of Heliopolis was one of ancient Egypt’s most important religious centers, the focus of the civilization’s solar cult, and a destination for pilgrims for nearly 3,000 years. It was at Heliopolis where Egyptian priests developed one of Egypt’s three major creation myths, which, like any aspect of a culture that survived for as long as Egypt’s did, evolved throughout the centuries. Heliopolis’ origins were quite humble though, and it does not appear that it was ever planned to be a great city. The city began as a small settlement in the late 4th millennium BC, but within a couple of hundred years it became the center of Egypt’s solar religion, due to several fortuitous circumstances.

Heliopolis’ proximity to the political capital of Memphis no doubt helped with its early growth, as did its patronage by some important early kings. By the Middle Kingdom (c. 2055–1650 BCE), Heliopolis was one of the most important religious centers in Egypt, and the most important kings saw it as essential to erect monuments in the city. As Egypt’s dynasties and kingdoms rose and fell, Heliopolis, the “City of the Sun,” kept shining, attracting numerous kings to leave their mark. Throughout the New Kingdom (1550–1069 BCE) and the Late Period (728–332 BCE), Heliopolis continued to attract kings, sometimes foreigners, who wanted to establish their legitimacy as pharaohs.

Although Heliopolis faded and eventually disappeared as an important religious center after the Greeks and Romans took control of Egypt, its memory remained. The name Heliopolis is actually Greek for “city of the sun,” while the Hebrews knew it as “On,” proving that its historical memory was (and remains) quite strong.