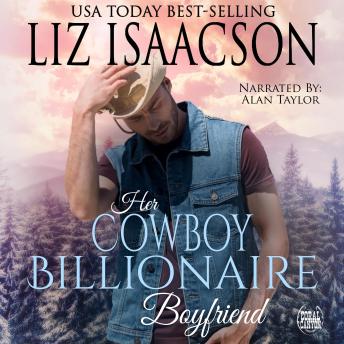 Download or Stream instantly more than 55,000 audiobooks.
Listen to "Her Cowboy Billionaire Boyfriend: A Whittaker Brothers Novel" on your iOS and Android device.

A public relations director who moonlights as a cowboy, the woman who dislikes him and his energy company, and the job that could bring Andrew and Becca together...


Andrew Whittaker is used to having every little thing in place, from his hair to his tie. He's the public face for the Whittaker Brothers' family energy company, and with his older brother's robot about to be announced, he needs a press secretary to help him get everything ready and tour the state to make the announcements.


When he's hit by a protest sign being carried by the company's biggest opponent, Rebecca Collings, he learns with a few clicks that she has the background they need. He offers her the job of press secretary when she thought she was going to be arrested, and not only because the spark between them in so hot Andrew can't see straight.


Becca has spent the last ten years working against companies like Andrew's, but could this be her chance to influence change from the inside? She's smart, inquisitive, and driven—exactly what the company needs. Her attraction to Andrew is instant, and his invitation to dinner simply sweetens the deal. So she takes the job—and the dinner date.


Can Becca and Andrew work together and keep their relationship a secret? Or will hearts break in this classic romance retelling reminiscent of Two Weeks Notice?