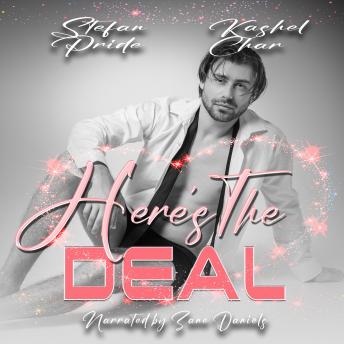 Download or Stream instantly more than 55,000 audiobooks.
Listen to "Here's the Deal" on your iOS and Android device.

As Daniel is driving his new sports car from Cincinnati to Nashville, he notices a hitchhiker thumbing on the side of the highway. In the blink of an eye, a simple game plan forms in the young scholar's mind. Pulling over, the student offers the sexy older man a ride…with conditions.

Mike accepts the conditional offer from the very handsome and arrogant rich boy.

The deal was a simple one…at first. A ride for a ride.


Advisory: This book is not intended for readers under 18 years of age, or anyone who is triggered by mild Bondage and Discipline with dubious consent. The story deals exclusively with Male-Male sex, and if a potential reader finds homosexuality offensive, this is not a story for you. While the towns mentioned are real, all the characters are strictly fictional and are not meant to portray anyone living or dead. ©2021 Stefan Pride and Kashel Char

This book has been retitled. The book was previously published as The Twisted Deal previously and has now been updated with fresh thoughts from a new co-author who has been preparing for audiobook recording.