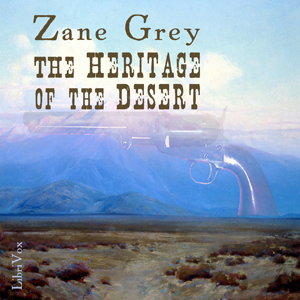 The Heritage Of The Desert

Download or Stream instantly more than 55,000 audiobooks.
Listen to "The Heritage Of The Desert" on your iOS and Android device.

Jack Hare is a young cowboy who was rescued from sure death by an old settler by the name of August Naab. Hare learns that Naab's ranch is a dangerous place and is challenged by cattle thieves and a corrupt rancher who is after Naab's water rights. The greatest danger Hare faces though, is over Mescal, a half-Navajo shepherdess who is already promised in marriage to Naab's first-born son. Hare must stop the marriage, but can't kill the son of his benefactor, August Naab...until a gun battle with rustlers brings the two face-to-face over drawn pistols. (Summary by Jerry James)