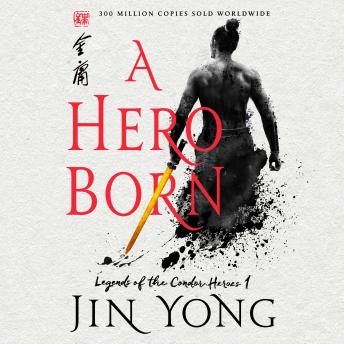 A Hero Born: The Definitive Edition

Download or Stream instantly more than 55,000 audiobooks.
Listen to "A Hero Born: The Definitive Edition" on your iOS and Android device.

The epic Chinese classic and phenomenon published in the US for the first time!

A fantastical generational saga and kung fu epic, Jin Yong's A Hero Born is the classic novel of its time, stretching from the Song Empire (China 1200 AD) to the appearance of a warlord whose name will endure for eternity: Genghis Khan. Filled with an extraordinary cast of characters, A Hero Born is a tale of fantasy and wonder, love and passion, treachery and war, betrayal and brotherhood.

After his father, a Song patriot, was murdered, Guo Jing and his mother fled to the plains and joined Genghis Khan and his people. Loyal, humble and driven, he learned all he could from the warlord and his army in hopes of one day joining them in their cause. But what Guo Jing doesn’t know is that he’s destined to battle an opponent that will challenge him in every way imaginable and with a connection to his past that no one envisioned.

With the help and guidance of his shifus, The Seven Heroes of the South, Guo Jing returns to China to face his foe and carry out his destiny. But in a land divided by treachery and war, betrayal and ambition, he’ll have to put his courage and knowledge to the test to survive.

'Actor/filmmaker Daniel York Loh draws from his British/East Asian background to bring a unique cross-cultural graphic novel voice and energy in this Chinese version of a super hero saga.' — BookTrib