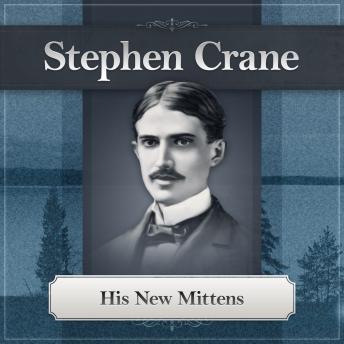 Download or Stream instantly more than 55,000 audiobooks.
Listen to "His New Mittens: A Stephen Crane Story" on your iOS and Android device.

An interesting story about how a boy goes to school with new mittens his mother wants him to protect. To do so he cannot join in a snowball fight with his friends with parents less scrupulous about clothing and the like. The boy ultimately gives in, gets in trouble with his mother, is made to eat alone, attempts to run away much but only makes it to their cold shed.

He then gathers his forces to leave for California, where ever that might be. He gets to the street, trudges up in one direction, and see the butcher's shop. Here is a Winesburg, Ohio moment, when the boy enters the store, he is lucky that the store owner, having been a boy himself, sees something is wrong. He listens to young Horace and takes him back home where all is forgiven since losing the son was far worse than the mitten issue,

In thanks, and significant for the times, the mother calls the shopkeeper by his last name, and says, "Won't you have a glass of our root beer, Mr. Stickney? We make it ourselves."

Their form of champagne is shared; the neighbor feeling has worked; the world, or at least that little piece of it, is back on course. Especially appealing to those who liked O'Henry's, The Ransom of Red Chief.