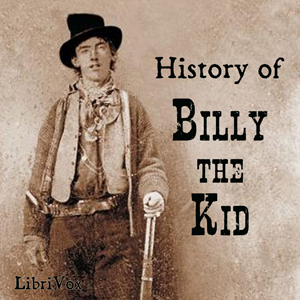 History of Billy the Kid

Download or Stream instantly more than 55,000 audiobooks.
Listen to "History of Billy the Kid" on your iOS and Android device.

A cowboy outlaw whose youthful daring has never been equalled in the annals of criminal history.
When a bullet pierced his heart he was less than twenty-two years of age, and had killed twenty-one men, Indians not included.

The author feels that he is capable of writing a true and unvarnished history of "Billy the Kid," as he was personally acquainted with him, and assisted in his capture, by furnishing Sheriff Pat Garrett with three of his fighting cowboys--Jas. H. East, Lee Hall and Lon Chambers.

The facts set down in this narrative were gotten from the lips of "Billy the Kid," himself, and from such men as Pat Garrett, John W. Poe, Kip McKinnie, Charlie Wall, the Coe Brothers, Tom O'Phalliard, Henry Brown, John Middleton, Martin Chavez, and Ash Upson. All these men took an active part, for or against, the "Kid." Ash Upson had known him from childhood, and was considered one of the family, for several years, in his mother's home.

Other facts were gained from the lips of Mrs. Charlie Bowdre, who kept "Billy the Kid," hid out at her home in Fort Sumner, New Mexico, after he had killed his two guards and escaped. (Introduction by the author)