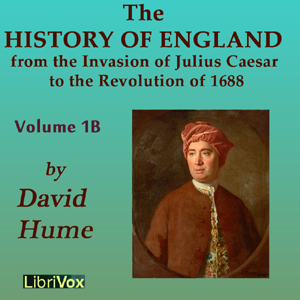 History of England from the Invasion of Julius Caesar to the Revolution of 1688, Volume 1B

Download or Stream instantly more than 55,000 audiobooks.
Listen to "History of England from the Invasion of Julius Caesar to the Revolution of 1688, Volume 1B" on your iOS and Android device.

David Hume is one of the great philosophers of the Western intellectual tradition. His philosophical writings earned him lasting fame and renown; his historical writing earned his bread and butter. His "The History of England from the Invasion of Julius Caesar to the Revolution of 1688", published between 1754 and 1764, was immensely popular and Hume wrote that "the copy-money given me by the booksellers much exceeded any thing formerly known in England; I was become not only independent, but opulent." The six volume work has had numerous editions and is still in print today. David Hume and Thomas Babington Macaulay have frequently been compared as the premier English historians but we don't have to choose because Macaulay begins where Hume leaves off. This is Volume 1B which covers the reigns of Henry III to Richard III. (Summary by Richard Carpenter)