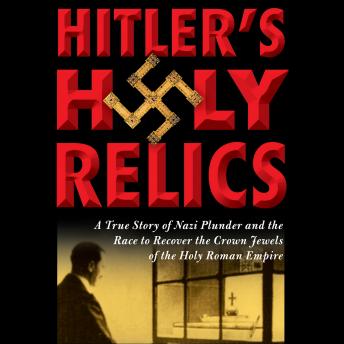 Hitler's Holy Relics: A True Story of Nazi Plunder and the Race to Recover the Crown Jewels of the Holy Roman Empire

Download or Stream instantly more than 55,000 audiobooks.
Listen to "Hitler's Holy Relics: A True Story of Nazi Plunder and the Race to Recover the Crown Jewels of the Holy Roman Empire" on your iOS and Android device.

Had Hitler succeeded in conquering Europe, he would have crowned himself Holy Roman Emperor. The Nazis had in their possession priceless artifacts that would give Hitler legitimacy in his subjects' eyes: the Crown Jewels of the Holy Roman Empire including the Spear of Destiny, alleged to have pierced Christ's side at the Crucifixion. Looted from the royal treasury in Vienna, Austria, the Crown Jewels were hidden in a secret bunker deep beneath Nürnberg castle, known to few but Heinrich Himmler, his staff-and a captured German soldier whose family lived above it. As luck would have it, the officer in charge of interrogating the soldier was First Lieutenant Walter Horn, art history professor. Following his report to General Patton, Horn would be assigned to recover this ancient treasure. Would he find it before covert Nazi agents could use it to revive the defeated regime? Based on recently discovered and previously unpublished documents and interviews with all remaining living participants, this is a tale that surpasses fiction: part thriller, part detective story, all true.