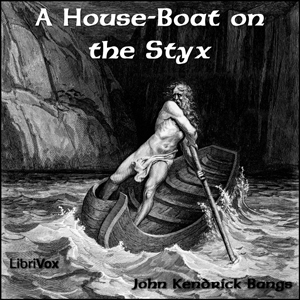 A House-Boat on the Styx

Download or Stream instantly more than 55,000 audiobooks.
Listen to "A House-Boat on the Styx" on your iOS and Android device.

The premise of the book is that everyone who has ever died (up until the time in which the book is set, which seems to be about the time of its publication) has gone to Styx. This does not appear to be the conventional Hell described by Dante in The Inferno, but rather the Hades described in Greek myth (both of which had Styxes): a universal collecting pot for dead souls, regardless of their deeds in life.

The book begins with Charon, ferryman of the Styx (in The Inferno, he was the ferryman of the river Acheron) being startled-and annoyed-by the arrival of a house boat on the Styx. At first afraid that the boat will put him out of business, he later finds out that he is actually to be appointed the boat's janitor.

What follows are eleven more stories (for a total of twelve) which are set on the house boat. There is no central theme, and the purpose of the book appears to be as a literary thought experiment to see what would happen if various famous dead people were put in the same room with each other. Each chapter is a short story featuring various souls from history and mythology. (Wikipedia)