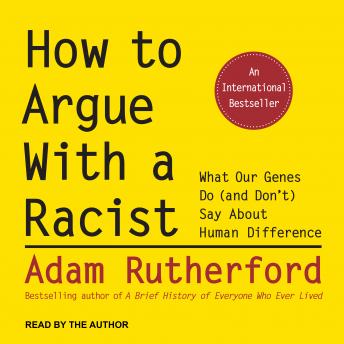 How to Argue With a Racist: What Our Genes Do (and Don't) Say About Human Difference

Download or Stream instantly more than 55,000 audiobooks.
Listen to "How to Argue With a Racist: What Our Genes Do (and Don't) Say About Human Difference" on your iOS and Android device.

Race is not a biological reality. Racism thrives on our not knowing this.

Racist pseudoscience is on the rise-fueling hatred, feeding nationalism, and seeping into our discourse on everything from sports to intelligence. Even the well-intentioned repeat stereotypes based on 'science,' because cutting-edge genetics are hard to grasp-and all too easy to distort. Paradoxically, misconceptions are multiplying amid today's unprecedented surge of research on human genetics. We've never had a clearer picture of who we are and where we come from, and the science, when accurately understood, is a powerful and definitive ally against racism. But not nearly enough of these findings have made their way into the casual conversations we have about race.

This penetrating guide shows us how being a responsible and enlightened citizen on the matter of race today requires us to know what modern genetics actually can and can't tell us about human difference. Racial categories still vexing our societies do not align with observable genetic differences-and those differences are, in fact, so minute that they serve as evidence of our commonality.