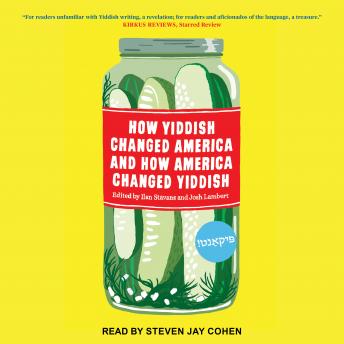 How Yiddish Changed America and How America Changed Yiddish

Download or Stream instantly more than 55,000 audiobooks.
Listen to "How Yiddish Changed America and How America Changed Yiddish" on your iOS and Android device.

Is it possible to conceive of the American diet without bagels? Or Star Trek without Mr. Spock? Are the creatures in Maurice Sendak's Where the Wild Things Are based on Holocaust survivors? And how has Yiddish, a language without a country, influenced Hollywood? These and other questions are explored in this stunning and rich anthology of the interplay of Yiddish and American culture, edited by award-winning authors and scholars Ilan Stavans and Josh Lambert.