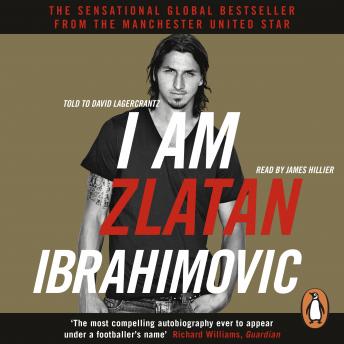 I Am Zlatan Ibrahimovic

Download or Stream instantly more than 55,000 audiobooks.
Listen to "I Am Zlatan Ibrahimovic" on your iOS and Android device.

Zlatan Ibrahimovic - professional football's most mercurial player, Swedish national hero, tabloid fixture, fashion icon, modern day-philosopher and black belt in Taekwondo. Born to a Muslim father from Bosnia, and a Catholic mother from Croatia, Zlatan recounts his extraordinary life story, from his poverty-stricken upbringing as an immigrant in Malmö, Sweden, to becoming one of the world's most sought-after and expensive players, gracing Europe's finest clubs, from Ajax to Juventus, Internazionale to Barcelona, Milan to Paris Saint-Germain, and now Manchester United..

I AM ZLATAN reveals a rare and ferocious intelligence, willpower and God-given talent most recently exhibited when Zlatan scored all 4 goals for Sweden in a 4-2 victory against England. His fourth goal, a 30-yard overhead kick with his back to goal is widely regarded as one of the greatest goals of all time. The BBC described it as a goal that 'combined unfathomable imagination and expert technique'.