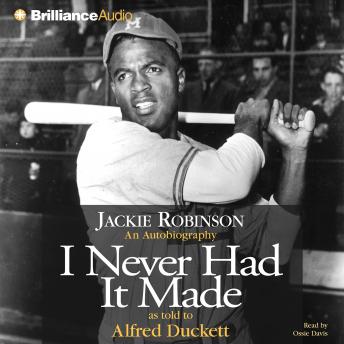 I Never Had It Made

Download or Stream instantly more than 55,000 audiobooks.
Listen to "I Never Had It Made" on your iOS and Android device.

A straightforward yet inspiring story of what it took to be the first man of color to break into the white world of professional sports. Jackie Robinson's story is more than a telling of his tremendous talent; it is also a recollection that showcases his tenacious spirit, bravery and the courage of his ideals. From the early influences of family and friends, to his time at UCLA, to the army where he challenged racism and Jim Crow laws, Jackie Robinson traces his life to playing in the black leagues, frustrated by the abuses and restrictions of second-class status in professional baseball.

As Branch Rickey, president of the Brooklyn Dodgers, began to look around for a player to break the color barrier in 1946, he knew he needed a man of character who could withstand the pressures of his 'Noble Experiment.' Choosing Robinson gave both of them the chance to prove what they believed in.

Struggles that continued in his personal life and in response to the turbulent sixties are interpreted with insight by Robinson and will give listeners an added appreciation for the amazing strength of his character.