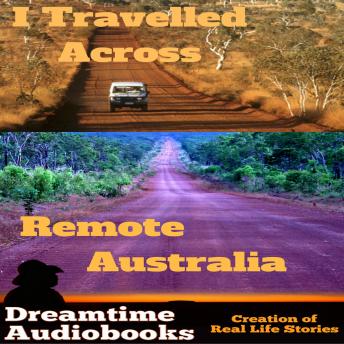 I Travelled Across Remote Australia

Download or Stream instantly more than 55,000 audiobooks.
Listen to "I Travelled Across Remote Australia" on your iOS and Android device.

I travelled across remote Australia to 3 different states visiting several remote Indigenous communities to see how they lived in regards to creating sustainable livelihoods but also how they used western technology to survive. Again out of respect for Indigenous law of Australia I can't mention any names of people given that people have passed away.

I looked at several main issues in their lives to do with energy, planning, communication, health, housing, water and transport, as we all need these to survive, but for these Indigenous people in remote Australia surviving can be a bit more difficult given that they live in such remote places in Australia. I travelled to 3 main regions of Australia, the Kimberly region of Western Australia, Arnhem Land in the Northern Territory and Cape York in far north Queensland.
We look at how dirt roads are constructed in the Kimberly given that they have massive floods from the wet season that can cut off communities for months and how they build dirt roads from Black soil so it's compacted like cement. We hear about the importance of looking after environmental health in Arnhem Land and also how ladies make their bush medicines from plants from the bush when people get sick.


We hear from a man who lives on Devil Island who used to use diesel generators but it became too expensive buying fuel, so he purchased his own wind turbine from another state known as Victoria so he could have power from the wind on his homeland.
We visit the remote community of Port Stewart on the far north coast of Cape York where people recently moved back to their homelands after being forced off their land for mining gold several decades ago. We also have some fun and play football with the kids in Port Stewart.
We fly to the Tiwi Islands to hear about how the ladies make their own traditional clothes for the tourists who visit their island. Their designs are unique stories of their 'Dreaming stories 'how their land was formed thousands of years ago from different animals such as the crocodile. We go back to Arnhem Land to the community of Ramanginning where they have a program called ' caring for country,' and we also look at contaminated water, how their water bore was fixed so they could have clean drinking water.

We visit the western desert where ladies talk about how they had no telephone to call for help if someone got sick. They wanted to put pressure on service providers to get their telephone connected. We hear them talk in their traditional language so we had to get an interpreter to translate what they were saying.
The Wirapunda family of Dhurrupitjapi Homelands in Arnhem Land talk about true reconciliation in Australia where their family and the McCall family had a conflict between their great grandparents decades ago not understanding each other's laws, but both families came together and are now good friends helping each other.
Finally, we hear from one the last great stockmen of Cape York. How he rode on horses rounding up cattle and getting them to market. He used to go through large rivers with his cattle with large crocodiles around him, as Cape York has some of the biggest crocodiles on earth